Pietro VitaliniPresident &amp; Founder
Pietro Vitalini was born in Bormio in 1967 and began participating in the world of skiing when he was very young, in fact, at only 14 years old he won the Italian Championships, a victory that consecrated him as a high level athlete. It was the beginning of a long and successful career alongside champions such as Alberto Tomba and Deborah Compagnoni.

In 1995 Pietro Vitalini miraculously survived a ruinous fall during the Kitzbuhel World Cup Downhill race earning him the nickname of “Alitalia”. It was this year which gave him his greatest fame and success. After a few years as a professional in the United States and as a sports commentator for TV in Switzerland, Pietro Vitalini became an entrepreneur and founded the VITALINI PERFORMANCE SKIWEAR. By opening this chapter of his life, Pietro has renewed his commitment to the world of skiing and sport, conquering new awards and successes as an entrepreneur. 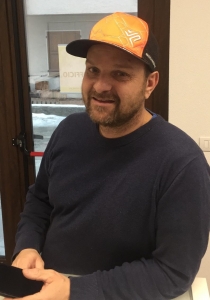 PaolaCustomer Service
This site uses cookies to improve the browsing experience of users and to collect information on the use of the site itself.Accept and continueNo, thanks